Most golfers’ first interaction with the brand Wilson is when they were beginners and needed a cheap set of clubs to start learning the game. Thus, Wilson became widely known as a “cheaper” golf brand. But Wilson has been redefining itself in the last couple years by steadily improving its Wilson and Wilson Staff lineup of clubs. 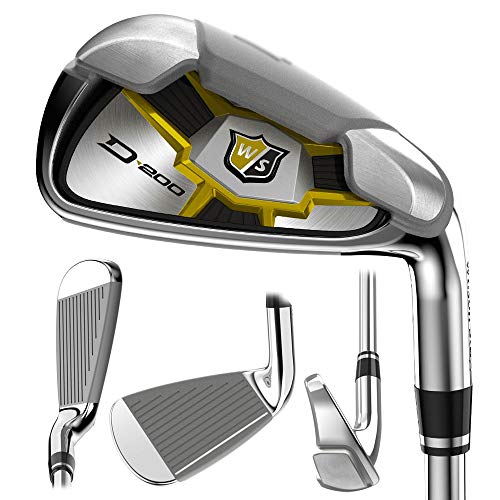 Compared to Wilson’s beginner clubs, the D200 series of irons have some key differences. The set also has some Key Features that make for better all-around performance.

As you can see there are some great features found with the D200 Irons that can also be found on other high-end irons. Some of the more interesting technology like Speed Sole Technology and Super Thin Face will be talked about in the next section. So in this section, we will focus on the clubhead design and club configuration.

With the clubhead design, Wilson chooses to use a traditional Cavity Back Design. This means the D200 Irons will offer greater forgiveness compared to muscle back or forged irons. Wilson doubled down on the forgiveness by including special perimeter weighting that helps keep mishits from going off target.

Wilson Staff keeps it pretty simple when it comes to options for the D200 Irons. Eight irons come in the set and cover from 5-9 iron as well as three wedges PW, GW, and SW. A custom Wilson Staff grip and steel shaft come standard.

Now we can dig into the special technology packed into the D200 Irons! Speed Sole Weighting is a special technology that Wilson uses to optimize the D200 irons for optimal launch on any type of lie. To accomplish this, excess weight has been moved closer to the sole of the club to create a low center of gravity and high MOI. A slightly widened sole with a special grind also helps by cutting through any tough lies.

Another important technology that plays a big part in ball speed and distance is the Super Thin Face. By creating a thinner face, Wilson allows the D200 to have more a trampoline effect similar to that of a driver. This results in higher ball speeds and longer distances compared to cheaper irons.

Who can benefit from these irons

While the Wilson Staff D200 Irons are a definite step up from regular Wilson irons, the benefits are still relatively niche. The set is nicer than beginner irons but still lacks some of the features of intermediate irons. So this places them in an almost “in-between area” where for a bit more cash, you can get a significantly better set.

With that being said, these clubs can still benefit some groups of golfers. First are beginner golfers who are getting a great feel for the game. This set is relatively inexpensive and is much better than most beginner iron sets. Another group that can benefit are golfers on a severe budget. Again, these clubs are priced in a way that most golfers can get their hands on for cheap.

When compared to beginner irons, the D200 Irons offer lots of benefits. More distance, forgiveness, and ball speed are just some of the important benefits. Plus, better turf interaction makes it easier to get the ball off the ground.

But the main drawback to the D200 Irons is that they do not necessarily fit in as an intermediate iron set. Sure, they are better than beginner irons but they just don’t have the polish or features of other intermediate irons.

Maybe the first thing to address is the very similar design between the D200 and D300 irons. Both sets of irons have almost the exact same looks with one big difference – fit and finish. The D300 Irons look significantly more premium than the D200 Irons. Plus there are some differences between the two in terms of performance, with the D300 pulling ahead in the matchup.

So if you want a proper intermediate set of irons, the Wilson Staff D300 Irons would be the go-to.

Overall, the Wilson Staff D200 Irons are a great set of value irons that bridge the gap between beginner and intermediate golf irons. These irons also give golfers a glimpse into what the higher end Wilson Staff lineup of clubs has to offer. And at its low price, this set really is a great value.

But before you rush out and try to buy the D200 Irons, make sure they are the best choice for you. Because if you plan on really getting into golf, some other iron sets might be better suited for your plans. But if you are on a budget and want a great value set of irons then the D200 are a perfect choice.

We hope that you enjoyed this review guide and got all the information you need to make an informed decision on the Wilson Staff D200 Irons. If you have any questions or comments about this guide, let us know in the comments section below!

Deciding if these are the right irons for your golf game is easy with our detailed review and ratings!

Golf Tips For The Lefties