TaylorMade has in recent years been on an absolute tear when it comes to the overall performance of its drivers. Many golfers will pin this success to the introduction of the M2 driver in 2017. But much of TaylorMade’s journey towards top tier distance and performance started with the R15 Driver.

Released in early 2015, the TaylorMade R15 Driver brought golfers unmatchable customization and distance. The driver was an instant success among golfers and even today still performs quite well. So in today’s article, we will be taking a closer look at the R15 and what golfers can expect from this legendary club. We will also touch on some other topics such as what other drivers TaylorMade has and how they compare to the R15. 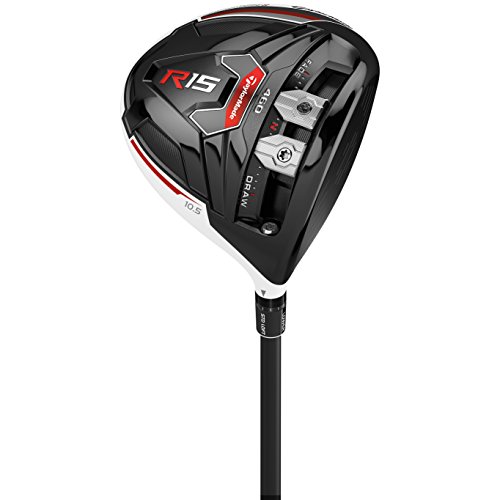 Here is a quick overview of the three biggest features that appear on the R15 Driver:

What’s more is that instead of one interchangeable weight, there are two Sliding Split Weights. This means that golfers have more control than ever over how to correct slices or help induce fades. Another benefit of the Sliding Weight System is that golfers can position the weights in a way that will give similar forgiveness and distance as Callaway’s Jailbreak Technology.

The final feature of the R15 that can also be found on most of today’s top drivers is an Adjustable Loft Sleeve. With the Adjustable Loft Sleeve, golfers can change the loft +/- 4 degrees. This is perfect for golfers who want to get more carry, or perhaps adjust the club for a more piercing ball flight.

Who is Best Suited for this Club

TaylorMade designed the R15 to appeal to a broad range of golfers. So low, mid, and high handicappers can all enjoy the benefits that the R15 has to offer. But golfers who want more control over their driving game and golfers who suffer from a slice have the most to gain from the R15.

For the group of golfers who want more control, the R15 is a perfect choice. Not only can you use the Front Track System to dial in the perfect shot shape, but the adjustable loft sleeve lets you find the perfect launch angle. There are very few drivers on the market that give this much adjustability.

Golfers who are battling a slice can find the R15 as a reliable way to stop slicing. It’s important to mention that a slice is caused by a swing issue, not a club setting, so the “fix” that the R15 offers isn’t a true fix. But by setting the weights to the heavy fade position, golfers should see a straighter shot or at least a shot with less of a pronounced slice.

Golfers who plan to use the R15 as a way to stop a slice should note that their slice could become worse after using another driver. This is because your bad swing habits could become worse thanks to the counteractions of a heavy fade setting on the clubhead. The best advice we can give is to use the R15 as a crutch in the short term, while trying to fix the root of the problem in your swing in the meantime.

As we have covered, the R15’s biggest benefit comes from its outstanding adjustments and customizability. Another benefit comes in the form of a high-end Fujikura Speeder shaft that helps create optimal launch and spin rates. So golfers should expect great distance and carry from the R15 Driver.

There are some subtle drawbacks though. Foremost is that the club is over 5 years old at the time of publication. This in itself isn’t a bad thing, but over the years drivers have become much more forgiving. The age issue also means that many options for this club are no longer available. So you might have trouble finding an R15 with your favorite mix of shaft flex and loft.

The second drawback, albeit a specific one, is that this club could be too light for certain golfers. Because all the weight is right behind the face and in line with the shaft, the club doesn’t feel as heavy as other rear weighted drivers.

Other TaylorMade Drivers to Consider

TaylorMade has been the king of drivers in recent years, so there are many different TaylorMade Drivers to consider. Perhaps the most known TaylorMade Drivers are the M Series. Starting in 2017 with the M1 and M2 Driver, TaylorMade changed the game in distance and forgiveness. Since then Taylormade has released the multiple revisions of the M series clubs, including the newest M6 Driver. All these drivers have the most advanced golf technology and are priced much higher than the R15.

For golfers looking for an alternative to the R15, the popular TaylorMade RBZ Black could be the answer. At just $200, the RBZ Black has fewer features than the R15 but still has outstanding distance and forgiveness. Currently, the RBZ Black is a best seller on Amazon and has amassed hundreds of five-star reviews.

Of course, there are even more TaylorMade Drivers on the market including the brand new SIM drivers. But most older drivers can only be found in used condition while the SIM lineup is upwards of $500.

Here is a quick roundup of the biggest positive features of the R15 Driver:

Despite lots of benefits, there are a couple of drawbacks which include:

Overall the TaylorMade R15 is an outstanding driver that offers unmatched amounts of control and adjustability. And despite being over five years old, it still holds up when compared to many of today’s latest and greatest drivers. At its current price point, the R15 driver also makes for a great “bang-for-your-buck” golf driver.

If you plan on adding the R15 to your golf bag, just be ready to make some compromises. Because of its age, you might not find any R15 configurations that fit your golf game. This might mean that you will have to invest in a different shaft or perhaps even build the club using an R15 club head and third-party shaft.