As the second iteration of the critically acclaimed M Series, the TaylorMade M4 Driver brings even more innovation to the series. A new face architecture and better aerodynamics push the limits of just how well a golf driver can perform. According to TaylorMade, the M4 brings tour-level performance to the everyday golfer.

In today’s article, we will be reviewing the M4 driver and what it has to offer golfers. A close look at the club’s cutting edge technology will be included as well as a section on who can benefit the most from using the M4. We will also discuss the main differences between the M3 and M4 and which is best for your individual game. 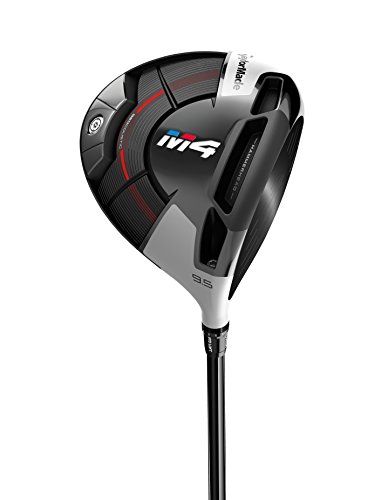 The M4 Driver has many new and updated features compared to the last generation M2 Driver These important features include:

Perhaps the greatest innovation with the M4 Driver is the introduction of Twist Face. In short, Twist Face allows for more forgiveness and better ball speed across the entire face. So even if you mishit the ball, Twist Face should help you get more distance with less sidespin. More detail about how Twist Face works will be presented in the next section.

Another improved feature with the M4 Driver was that TaylorMade offered more customization options for golfers. Upon release, golfers could choose between four different lofts and five different shaft flexes. This amount of customization was more in line with what other brands like Callaway were offering.

Technology used in this Club

In this section of our review, we will be taking a closer look at the special technology that makes the M4 such a well-rounded driver. First up is the all-new Twist Face technology. TaylorMade created the M4 with an all-new curved face that counteracts sidespin on mishit shots. This results in straighter and longer shots than with a traditionally flat driver face. The curvature in Twist Face is very slight and isn’t something you will notice at address. Also, there is no need to worry about the legality of using Twist Face. TaylorMade and the USGA confirm that the M4 driver is legal for all tournament and non-tournament play.

The other technologies present on the M4 like the Hammerhead Slot and Geocustic design are more subdued than Twist Face. In the case of the Hammerhead Slot, TaylorMade simply made it larger and better positioned to decrease weight and increase swing speeds. For the Geocustic Design, slight tweaks were made to reduce the sole size and tweak the tone of sound at impact.

Overall, these three technologies come together to make a fast, forgiving, and great sounding driver. While sometimes it hard to take an original and make it better, TaylorMade seems to have done just that with the M4 Driver!

Who is Suited for this Club

TaylorMade markets the M4 Driver as a driver for any level of golfer. And the fact of the matter is that TaylorMade is right, the M4 Driver will work for almost any golfer. Thanks to a simplistic shape and non-intrusive features, the M4 swings easy without the need for any swing adjustments.

Perhaps the area where the M4 shines the most is mishit forgiveness. So if you are a player that frequently hits shots outside the center of the clubface, you need Twist Face. Just a simple switch to the M4 Driver will keep more of your tee shots in the fairway rather than the woods or water.

One group of golfers who might not be a fan of the M4 Driver would be those who like to work the ball off the tee. While the M4 does offer some workability, the best club for the job would be the co-released M3 Driver. More on this later.

It’s quite clear at this point that the greatest benefit that the M4 Driver offers golfers is extreme forgiveness. But golfers should be aware that the M4 also offers solid distance and impressive swing speeds. Plus, the M4 has a sleek look both in the bag and at address.

There really are not all that many drawbacks with the M4. If you want to get picky, there is a slight lack of adjustment. This is mainly regarding the weighting, as there is an adjustable hosel sleeve. Of course, playing with the weighting can lead to issues with the performance of the Twist Face.

Overall, the benefits greatly outweigh the drawbacks. It’s for this reason that the M4 driver is still so highly coveted. With so much to gain and so little to have to settle for, the M4 is that once in a decade club.

Difference Between the M3 and M4 drivers

For those unaware of how the M series works, two different clubs are launched by TaylorMade. The “even number” (2, 4, or 6) is the club more heavily marketed as it is a traditional driver shape meant for regular golfers. But alongside this launch is the “odd number” (1, 3, or 5) sister club. This club has all the same features but comes in a “D” shape popular with higher skilled players.

Why the difference? Well, a “D” shaped driver gives golfers more workability at the cost of forgiveness. Of course, for higher-skilled players, forgiveness isn’t as necessary as it is for amateurs. So the trade-off of forgiveness for workability is a welcome deal.

The only other difference between the two clubs that the M3 Driver comes with adjustable sole weights to better tune the driver. This adjustable weight system is best used by more experienced golfers who know exactly what they want from their drives.

Other than these two differences, the M3 and M4 Drivers are the same. Each comes with Twist Face Technology, a Hammerhead Slot, and Geocustic Technology. So for most golfers, the M4 is the best driver of the two.

Here is a quick roundup of the best positive features of the M4 Driver:

There really are not any major cons, only subtle drawbacks like:

At the end of the day, it clear that the TaylorMade M4 is one of the world’s best drivers. With cutting edge technology and game-changing features, the M4 helps golfers of all skills hit better tee shots. So its no wonder that everyone wants in on this exceptional performance!

We really do recommend picking up the TaylorMade M4 Driver if you are looking to upgrade your old driver. While the M4 is still relatively expensive, it can still compete with the newest drivers. Plus, no other driver on the market has better performing technology than the M4. Unless another big advancement in driver technology happens, Twist Face will still be the best performing driver face for the foreseeable future.

So if you got the cash, go ahead and add the TaylorMade M4 Driver to your bag today and experience straighter and more consistent drives. We guarantee you won’t regret it!

How to Start a Golf Cart