Making a putt is like putting together a puzzle. Several pieces work together to create the outcome you’ve been chasing since you hit your tee shot. If one part is missing, you can’t complete the puzzle.

In a round of golf, the average golfer will strike more than 30 putts for 18 holes, making the putter the most frequently used club in your golf bag. The ability to putt well is an essential skill to have if you are trying to lower your scores.

Before you can begin making considerable improvements on the green, you need to learn how to hit your putter correctly. Let’s break down each of the most critical factors and discuss a few drills so you can start lowering your scores.

The first step of any putt is to read the green to determine the length of the putt, which direction it’s 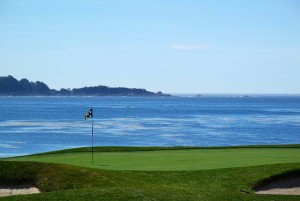 breaking, and whether it’s going up or downhill. These factors combined will determine where you need to aim and how hard you need to strike the putt.

You should be reading the green as you make your way up to it from the fairway because you can read the landscape and learn the breaks easily from a further distance. Additionally, you should try to walk around the ball to look at the angle of the putt from both sides, which helps in reading slight breaks.

One of the best methods you can use to help you read greens is to look for the lowest point of the green near your ball. That will be the way that your golf ball breaks more often than not. Once you have the break, pick a few spots between your ball and the hole you will be trying to hit with your putt.

Once you have these spots picked out, some golfers like to line up the putt with the line on the golf ball. This depends on the golfers’ preference, but I would suggest it to any player. If you have spots picked out that you are trying to hit on the way to the hole, the putting line will help you stay on track.

Lining up a putt with a solid line will also help you understand how well you struck the ball. If you see the line rolling straight on the path you aimed at, you know you hit it well. If it wobbles and ends us veering, you know that you didn’t hit the ball square and solid.

Now that we understand the break and the setup of the putt, it’s almost time to hit the ball. Before we do,

you should take some time to do a few practice strokes. Too often, golfers will make the mistake of doing a practice stroke without applying it to the putt at hand. Instead, they swing the putter back and forth a few times and then hit the ball.

On your practice swings, act like you are swinging the amount and direction you need to make the putt that you’re facing and then replicate that practice stroke once you’re ready to hit the ball. Doing this process correctly can help you considerably, especially once you understand how far a specific stroke length will roll.

There are two different types of putting strokes; one that arches and one that’s straight back and straight forward. When it comes to using a proper putting stroke, you need to understand your specific putter.

A blade-style putter will have the weight in the toe of the club, which will cause an arched swing. A mallet putter typically has even weight distribution throughout the face, which causes a naturally straight back and straight forward stroke.

To test your putting stroke, hold the club with just your pointer finger a few inches down from the head of the putter. If the toe of the putter drops down, it’s a toe hang and an arched stroke. If the face stays level, it will be a face-balanced putter and a straight stroke.

Now that you understand which stroke your putter was designed to perform, you can begin practicing correctly. This is a factor of putting that most golfers don’t understand and are not aware of. It’s common to believe that all putting strokes are supposed to be a straight line, but this isn’t the case.

The putting stroke itself is controlled mostly by the shoulders. As you stand over the ball, the shoulders will rock back and forth. Your arms and wrists will remain in the same position when you start the stroke until after you hit the ball. The lower body will stay still, and your weight will be evenly distributed throughout the putt as well.

Once you get used to only moving your shoulders, your ability to control the distance that a putt goes will increase because you can increase or decrease the amount, you move your shoulders. All other factors will always be the same.

Another way to help you control your distance and consistency is to make your backswing and follow through the same length. This technique is easy to repeat, and it will help you maintain control.

As you stand over the putt, your eyes should be looking directly down on the ball as this will make it easier for you to hit the center of your clubface, which is vital to an accurate putt. Your arms should hang directly below your shoulders. 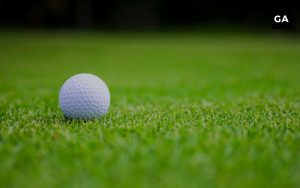 upstroke. Shooting on a slight upstroke allows you to utilize the loft of the putter and start the putt on the right line.

When the putt is struck on the way up, it begins to roll forward instead of skidding or being hit into the turf. If you haven’t been hitting putts on the upstroke beforehand, give this a try, and you should feel like the ball strike is smooth and accurate.

When it comes to holding your putter, there isn’t a single method considered to be the best. It comes down to the players’ preferences and the style of grip they choose. You should practice a few different grip styles and see which one is the best fit for you.

It’s common for golfers of all skill levels to change their putter grip from time to time. If you’re going through a slump inputting or you’re not comfortable with the grip you’re using, try something new.

Some of the most common putting grip styles are traditional, non-dominant hand low, ten-finger grip, and split hand grip. Give these a try and see which one seems most comfortable to you, and don’t be afraid to switch it up.

Everyone knows that practicing your putting is essential, but more importantly, you need to be practicing with a purpose. You may think that hitting a couple of putts before you head out on 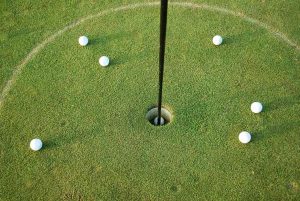 the course is good, but you’re not doing much for yourself by doing that.

Before you play, you want to get a feel for putts from several different lengths and breaks to simulate what you will see out on the course. Avoid hitting a putt from the same spot over and over because, on the golf course, you’ll never have the same putt twice in a row.

When you get on hole number one’s green, the first putt of the round could be tricky if you didn’t get some practice in beforehand. You don’t know how fast the greens are, and it can be hard to have a feel for a longer putt without having swung the putter that day. If you have a few minutes before your tee time, there is an easy drill that you can do to solve this problem.

Do this drill several times before your round, and when you get on the golf course for that first putt, you can count how many paces you are from the hole and use the feel you gained before the round to make a serious attempt to make the putt.

After hitting a variety of different putts to warm up, you should practice your pressure putting. The purpose of practicing putting in a clutch situation is to be more prepared when you’re facing a five-footer to win the hole.

You may not think that you can’t practice these putts, but some drills make this possible. One of the most simple and effective exercises is what I call the Circle Drill.

We’ll use six golf balls for this drill and begin by pacing two steps from the hole. Now, walk around the hole and drop a ball every few steps as you make a circle around the hole, maintaining the original distance.

This drill aims to make each of the six putts, but the catch is, you have to start over from the beginning if you miss just one. Challenge yourself to try this drill before your next round or next time you practice, and don’t leave that green until you have completed the challenge.

By the time you get to that sixth putt, you will understand how this drill can simulate a high-pressure putting situation like the one you’d find on the course.

Putting is an essential part of golf and can make a difference for any golfer working to achieve the next level of success in their game. If you’re the type of player that only wants to go to the driving range and hit the driver, that’s alright, but the real noticeable improvement will happen within the short game.

If you take some time this golf season to work on your putting, practice with intent, and work on high-pressure putts, you will undoubtedly notice a decrease in your scores. So skip the driving range for a day, and first, learn about the type of putter you use and the stroke that should be applied to it.