How to Hit a Flop Shot

Is there anything better than watching Phil Mickelson or Tiger Woods hitting a flop shot? Standing just a few meters from the flag, they swing the lob wedge like a full-blooded driver and launch the ball high into the air. Then, like it has a parachute, the ball lands with the deft touch of a ballerina.

As is often the case, the world’s elite players make this shot look easy. Have you ever tried it? The golf flop shot may be the riskiest shot in golf because if you get it wrong you can thin it and hit it over one hundred yards away from the green.

This article is here to teach you the important changes you need to make in your set-up and swing to help you hit this shot. The flop shot is one that can really help you out of tricky situations and it is one that you should work towards having in your bag.

Before we get into this, like all things in golf, the flop shot takes practice to master. You will also make some mistakes in practice and probably look a bit stupid in the process. Leave your ego at the door and stick with it, then impress your friends with the majestic gravity-defying flopper.

How to Hit a Flop Shot – Complete Guide

What is a Flop Shot?

The easiest way to describe a flop shot is like a bunker shot played from the grass close to the green. The point in this shot is to float it high and land it soft. It is designed for those tricky situations when your short-side yourself and have little green to work with. 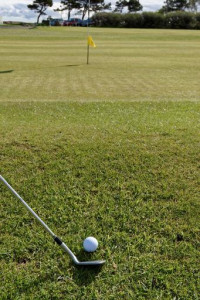 If performed correctly, the ball should come down on an almost vertical trajectory which prevents excess roll. The problem is that to get the right trajectory and landing angle for this shot, you need to swing it hard. This makes it a risky shot as a full swing beside the green can go wrong.

It is important to note that the flop shot has less backspin than a pitch shot, the control you get from this shot comes from the vertical landing. Think of it more as a helicopter shot than a fighter jet landing on an aircraft carrier.

Why you Need a Flop Shot in your Arsenal

Even during our best rounds of golf we still make loose shots. We know that we are supposed to try to miss the green on the correct side to leave as much room as possible, but we still find ourselves short-sided from time to time. This is when you need to be able to play the flop shot.

It is the perfect shot for those moments when you have a hazard, like a bunker, between your ball and the green. You could be short-sided with a bunker to navigate then barely any green once the ball lands.

What does Short-Sided Mean?

You have left yourself short-sided when you miss the green on the side closest to the flag. This makes for a tricky up and down because you have less “green to play with” and you have a much smaller margin for error.

How Does the Flop Shot Help Here?

Being able to throw the ball up in the air and land it softly maximizes the amount of green you are able to use. It gives you more control and lets the ball gently roll out, hopefully, close to the flag and in good position to make your up and down.

Missing greens in regulation can put a good round at risk or make a bad round worse. Having the flop shot in your game gives you options for these tricky situations and when you’re confident with the shot it can help you make those crucial pars and keep your round going.

How to Hit a Flop Shot

Hitting this shot requires many changes to your usual swing. It takes a different set-up, a different swing path, and a lot of confidence. Let’s break this down to help you put this shot into your game and help out in these tricky situations.

The first ingredient for this spectacular golf shot is a lob wedge. It makes it easier to use a club with a loft of 58 degrees or more, although you can still play it with a sand wedge. Now let’s have a look at the set-up changes you will need.

How to Set-Up for a Flop Shot

You want to think about the set-up that you should take for a bunker shot. If this isn’t something that you’re sure of then read on. The first thing to do is to set your body up open to the target. That means your feet, knees, hips and shoulders should be aiming left of the flag (for righties). 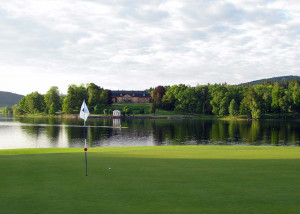 The more open your stance is, the higher you are likely to send the ball into the air and the less distance the ball will go. More open stances will also help you get a softer landing as you will make the descent angle of the ball more vertical.

This is something that you will want to play around with to see what it does to the shot. Generally, the ball should be in the middle of your stance or slightly forward. This will change how much contact the club makes with the ball which will alter how far the ball goes.

The further you play the ball in your stance, the more of a glancing blow you will make on the ball. This will make the ball fly less distance and but this is a nuance of the shot that you should practice and experiment with.

Depending on the shot that you are faced with, you either want the club face aiming at the target or open. 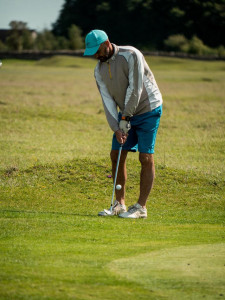 The more height you want or need on the ball, the more open it should be. Now you are ready to swing it.

Swing the club along the imaginary line made by your body. This will create an open swing which will help you create the height whilst compensating for the fact that your body is aiming so far to the left. It will help re-create the “splash shot” effect that you get in a bunker.

What Clubs Can you Hit a Flop Shot With?

This is a shot that requires loft, a wedge with 58 degrees or more of loft will be the easiest to work with for this shot. These clubs are designed for making this shot easier so take advantage of that as you are developing your skills.

The lob wedge certainly isn’t the only club you can use though. The sand wedge works, you can open that right up or you could make it even more difficult for yourself. The late and very great Seve Ballesteros used to play this shot with a 3 iron to develop his skills, give it a shot.

Whilst developing your flop shot skills with a 3 iron could be a little on the extreme side, you absolutely must practice this shot. Dedicate 10-20 balls of flop shots next time you are working on your short game.

You need to be so confident to play this shot, even though you are close to the green you need to attack the ball with a bold swing. If you decelerate into impact you will barely move the ball, you have to commit to this shot so get confident with it.

The flop shot is a beautiful shot and when it is played well it always gets deserved compliments. With just a few changes to your set-up, some focussed practice, and some confidence, you too can play this shot. This is a shot that can really help you out of tricky situations.

The most important factor in playing the flop shot well is spending time practicing it and committing to developing confidence in the shot. It is important to say that learning this shot is a lot of fun and when you start getting it right it feels fantastic.

It is no coincidence that the best flop shot artists in the world, Phil Mickelson and Tiger Woods, are two of the most creative short game players around. Around the greens, especially when they are quick, you need to have many shots in the bag and the flop shot is one of them.

Get yourself to the range or to a short game practice area and just commit time to playing around with the flop shot. Don’t worry about looking silly if you thin some or catch them fat, it takes time to develop this shot. Get good with it, get really confident, then wow your friends on the course.

For more expert golf tips & reviews, visit the Golf Accessories Reviews homepage or consider the following training guides for around the green:

Golf Swing Basics – Tips for Everyone

How to Hit a Driver

How to Hit a Driver