How to Hit a Bump and Run Golf Shot

If you’ve been playing golf long enough, you’ve likely realized that golf is much easier when it’s played on the ground. This is especially true when you’re approaching the green.

A bump and run shot is a golf shot that is typically hit from around the green with the intention of it staying close to the ground and roll out towards the hole.

To hit a bump and run shot correctly, you need to have the correct setup and swing to get the ball to jump forward on the right line, check-up, and roll like up towards the hole. This shot is actually quite simple to learn and will help you lower your scores.

How to Hit a Bump and Run Golf Shot 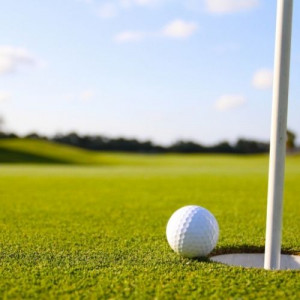 As we mentioned, a bump and run golf shot is a golf shot that is played from around the green with the intention of flying a short distance before rolling across the green towards the hole.

The intention of hitting this shot is to get the ball rolling as soon as possible and avoid the uncertainties of a lofted shot.

A lofted shot that flies almost to the hole with the intention of it checking up quickly after a couple of bounces always looks great but the likelihood of you actually pulling it off is slim.

You will have far better odds of getting it close to the hole and up and down if you keep the ball on the ground for a longer time.

Learning to hit a bump and run shot will come naturally, even to the weekend hacker.

This is because this shot type nearly mimics a putting stroke in the sense that you are swinging the club with little to no lower body movement and the club path will go directly away from and back to the hole during the swing.

How to Hit a Bump and Run

You will first grab anything from a pitching wedge to an eight-iron for this shot, but some golfers will go as far as hitting a hybrid. The club you choose will be determined mostly by the distance of the shot.

With a short shot onto a green, a pitching wedge is a useful bump club because it will check-up quickly and roll out a short distance.

If you’re in the trees from the rough or if you have to traverse an overly large green, hitting a bump shot with a hybrid is useful because of the pop you will get off the face and the long rollout.

Similar to a putting stroke, your feet will be close together with less than a foot between them. Your feet should be even with one another and pointed directly in front of you. This promotes swinging with your upper body and keeps your legs quiet.

The weight distribution of this shot type is unique because you will need to get the majority of your weight onto your front foot in order to make the proper contact of hitting the ball first on a consistent basis.

Place the ball in the back of your stance, in between your back foot and the middle. The reason for this is based on the desired outcome of the shot. We want the ball to bounce off the clubface and face and roll forward like a putt, so we need to hit down on the ball with low loft.

The bump and run swing is easy to learn and natural in the game of golf. Similar to a putting stroke, this stroke will go directly back and forward on the same line as the hole. This stroke limits clubface rotation and improves accuracy.

Once you have a feeling for this swing, you will realize that the distance that you hit the ball will be determined by the amount you bring the club back and through. Practicing these shots makes it easy to become consistently accurate.

Keep your arms in the same ‘Y’ position that they start in and swing them without bending your elbows.

When to Hit a Bump and Run Golf Shot 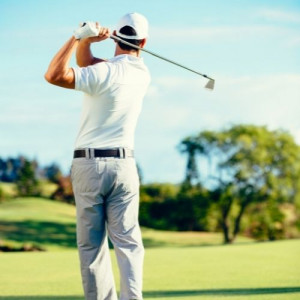 A bump and run will come in handy more often than you likely would think because of the versatility of this shot type.

I always recommend using this golf shot as much as you possibly can because of the increased rate of success that comes with it.

One of the most popular times to use a bump and run shot is when you are in the fairway short of the green with relatively flat ground between your ball and the pin.

With this location, you can choose a target location where you’d like the ball to land and then read the green like a putt from that point on. With a little practice, this will help you hit it accurately and with the correct speed.

Another great time to hit a bump and run shot is when you’re stuck in the trees and you are close enough to the green that a punch shot would be too much.

You’d want to hit this shot from the trees because there is little risk of error, and it allows you to get out of the trees with a short swing that doesn’t get high enough off the ground to be affected by tree branches.

The next situation where you should consider this shot would be from a tight lie like the skirt or fringe of a green. These shots are difficult to hit with a lofted wedge because of the risk of a thinned or bladed shot. If you swap out that 60 degree for an eight or nine iron, you can hit the ball square easily with little risk.

This shot will be far easier for the average golfer if they choose the proper club and bump the ball onto the green.

Finally, the last notable condition that would call for a low bump shot would be during rounds with high winds. As you know, high winds and a high ball flight often don’t mix well together, so keeping it low to the ground will be an easy way to keep the score down. A bump and run shot is affected very little by wind and considerably less than a lofted wedge.

What club should I use for a bump and run? 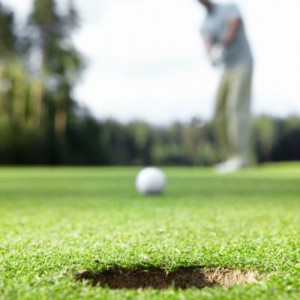 The club selection for this shot cannot easily be answered directly. It’s determined on the club you feel the best with for that distance, along with the conditions of the shot.

For example, if you have a longer shot that has to carry through a fairway onto a green, a hybrid bump might be the best choice.

On the other hand, if you have a shot that is just off the green in the rough, you might want to use a nine-iron or pitching wedge.

How do you hit a straight bump and run golf shot?

To hit a straight bump and run shot, you can mimic a putting stroke where you create a pendulum with your arms that doesn’t break. This is easily repeatable and will be on the correct line.

What is the difference between a pitch shot and a bump shot in golf?

A pitch shot will travel up into the air with the intention of landing on the green near the pin and checking up with spin. This shot will spend more time in the air than on the ground.

A bump shot is intended to jump forward and run out. It will spend far less time in the air than it will on the ground.

Get Out and Practice!

Now that you know the purpose, the benefits, and the swing of the bump and run shot, get out and practice it as much as possible. You will soon find that this shot type is easy to learn and much easier to hit than a high lofted wedge shot, especially around the greens.

With a bump and run shot, you will be closer to the hole on a much more consistent basis, and you will start getting up and down more often. This shot type might just be all that you need to take your game to the next level and shoot your record low this season.