The golf swing is one of the most complex combinations of movements to complete at high speed to ensure solid impact for good distance and direction.

Creating a consistent swing to ensure that every shot produces approximately the same distance, trajectory, and spin is crucial for golfers that want to reduce their scores and handicap.

Golfers that have developed the smoothest swings have realized that it is not only swing speed and ball speed that matters. They have developed a consistent golf swing tempo in their swing thus resulting in consistency without having to sacrifice swing speed.

When commentators discuss a golfer’s swing they often remark on the smoothness of a swing and how compact the golfer stays throughout the swing.

What is Swing Tempo 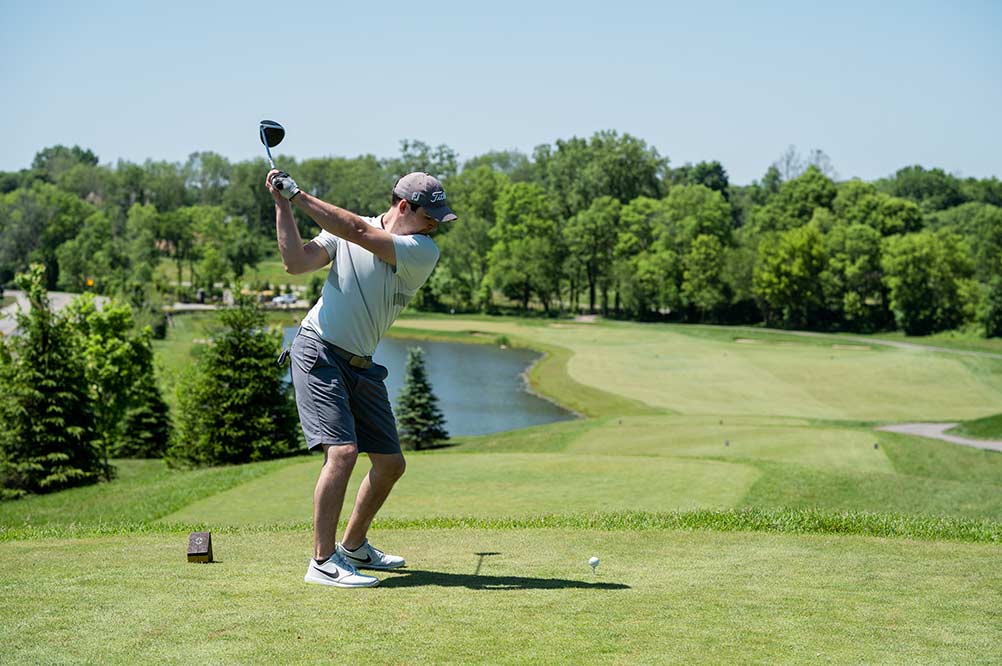 Swing speed varies from golfer to golfer as the flexibility in everybody differs.

Tempo however is something that all good ball strikers have in common irrespective of their swing speed. It is measured from the start of the take-away in the backswing up to the completion of the swing.

The golf swing is made up of many components that have to be synchronized with a few seconds leaving the golfer little time to think of every component during the swing. It eventually becomes an automatic action where the golfer relies on the ingrained swing. Or what many golfers call “muscle memory”.

Golfers often confuse a good tempo with a good rhythm. Tempo refers to the ratio of speed completing your downswing compared to the speed of the backswing. Rhythm is the flow of all the swing components into a fluid movement.

Rhythm and tempo work hand-in-hand- to create a consistent swing through impact.

John Novosel published his book “Tour Tempo” in 2004. This book publishes the results of the research done into swing tempo. It describes the four most common swing tempo speeds in terms of the video speed as frames per second. The speeds range from a relatively slow 27/9 to a fast 18/6. All of the speeds recorded results in a ratio of 3:1. 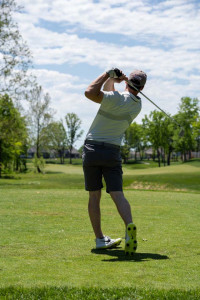 Maintaining the ratio is crucial in creating an even flow throughout the swing resulting in better and more consistent ball striking. And every golfer wants to produce a consistent swing to create solid impact and strike the golf ball in the sweet spot of the club.

From the description above it is clear that having a good tempo does not mean a slow swing speed. It is all about balance in the swing. A slow backswing followed by a superfast downswing will upset the rhythm leading to inconsistent shots while a fast backswing and slow downswing will result in weak shots that do not generate good distance.

Increased control resulting from achieving a good ratio will offer more confidence to the golfer and an upward spiral in the growth of their ability.

How to improve your Swing Tempo

Rhythm and a good tempo are key to hitting solid and consistent golf shots. The lack of a good tempo generally leads to poor technique. If the balance can be maintained throughout the swing and after completion, it indicates that the tempo is good. 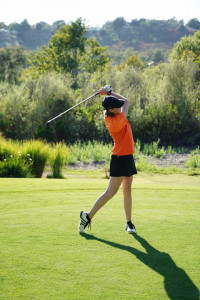 Swing speed increased distance hence a faster backswing will generate more distance if you maintain your 3:1 tempo provided the rest of the swing components remain intact and balance is maintained.

A solid tempo should enable you to maintain control over the club for a consistent swing path and quality ball striking.

Many amateur golfers tend to slow the clubhead speed on difficult shots where they should accelerate through the ball. Maintaining a good tempo will reduce the chances of deceleration in the clubhead especially when it comes to bunker shots and chip shots around the green.

The golfers’ physical condition plays a significant role in the tempo of the golf swing.

A lack of physical strength prevents the golfer to increase the speed of the swing while maintaining balance and control.

However, many physically strong golfers tend to use their strength to generate increased clubhead speed in the downswing rather than relying on the tempo and rhythm of the swing.

Tension in the body, arms, and hands lead to a multitude of swing faults. It could change the clubface when the grip is too tight on non-neutral grips.

Stress and tension will prevent a smooth tempo and rhythm and cause inconsistency in the swing.

A good practice is to set up a pre-shot routine to move the arms and legs to remove tension and to visualize the shot before addressing the golf ball.

Once the pre-shot routine is completed, the shot should be executed swiftly thereafter. Standing over the ball too long creates uncertainty and recreates tension.

Patience is not a virtue that too many golfers’ exhibit. However, to generate a good tempo it is critical to have patience at the end of the backswing. 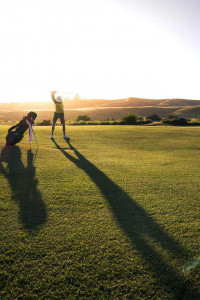 Before starting it is advisable to hover the club for a fraction of a second before changing direction and entering the downswing phase. This short break in the swing will allow for a fraction of time to perform weight transfer and stop rushing into the fastest part of the swing.

Furthermore, this can prevent strongly built golfers from exerting too much force into the early part of the swing.

Initiating the backswing with the lower body and allowing the arms to fall down while being pulled forward by the rotation will reduce the tension and result in a solid tempo.

Achieving a solid tempo and fluid swing does not happen overnight. It requires effort. The amount of effort depends on the natural ability of the golfer. Some of the most used drills are described below.

To increase the feel of the tempo, a one-handed swing similar to a pendulum swing back-and-forth. Both the backswing and downswing should be smooth throughout. Alternate between the trailing hand and the leading hand.

Start slowly and increase speed as long as it feels comfortable without losing control.

Smoothness throughout the swing sequence is a significant part of producing a good tempo. Starting the swing with a jerky motion or too fast will set the pace for the rest of the swing.

Placing a ball directly behind the clubface before initiating the swing will highlight the speed of the backswing. If the ball rolls for more than a few feet or it flies into the air, the backswing is probably too fast.

For the optimal speed of the takeaway, experimentation on the driving range is highly recommended.

Golfers that rush the swing will benefit most from this drill. 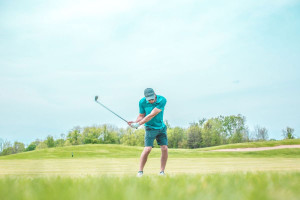 Swing the club back and forth toward and away from the target allowing it to swing like a pendulum with perpetual motion. Continue to swing for a while not stopping after reaching the most forward point.

This will provide the feel of continuation and prevent the golfer from forcing the swing thus creating a consistent feel and tempo.

As confidence increases the downswing speed can be increased until the perfect tempo is reached.

The drill will assist in reducing the rushed feeling in the downswing and transitions too quickly. Furthermore, it will aid in creating the lag at the top of the backswing.

Feel is a significant factor in the complete swing. To increase the feel aspect, it is important to have a smooth tempo throughout the swing sequence.

In circumstances that the swing tempo is inconsistent the closed eye drill will enable a golfer to swing the club and rely on feel rather than visualization. A benefit of this drill is that it can be executed anywhere a club can swing.

Start by closing the eyes and swing the club while increasing the swing speed. Closed eyes enable the sense of feel to provide increased feedback.

Increase length of the swing

It is highly recommended that the swing should not be executed at 100 percent effort. This is likely to exaggerate any swing fault. 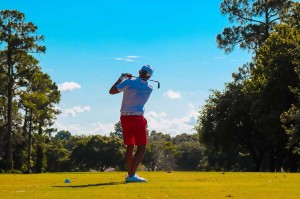 To add control to the swing, start by swinging the club back and forth to hip height at approximately 80 percent. Increase the length of the swing to shoulder height whilst maintaining the same swing speed and eventually complete the swing up to a balanced finish.

This will help you improve the mechanics of your swing and is conducive to maintaining a consistent swing speed.

Getting used to to a slower and shorter swing will benefit the golfer especially in windy conditions or when the approach does not allow for a full shot.

This is one of the best drills to ingrain a solid tempo into your swing while maintaining balance.

Put the feet together and swing a club back and forth. When the swing speed and tempo are too high it will pull the golfer off balance thus setting the optimal speed for a good tempo and balance.

Other Tips for Mastering Tempo

A fast backswing will impair the ability to complete the backswing and reach the limits set by flexibility thus resulting in a shorter backswing. Slow down the backswing until a speed is reached for optimal rotation without overextension.

Initiate the downswing with the lower body and keep the arms quiet. Allow the momentum of forward rotation to drag the arms towards the target. A sudden pull with the arms creates a lurching action thus a loss in rhythm and tempo.

The key aim is for the swing to remain smooth from start to finish. Any sudden unexpected moves will disturb the tempo. Keep it smooth.

Complete the swing and finish with the hands above or behind the shoulders. A good tempo will maintain balance throughout and after the completion of the swing. If balanced is disturbed, the tempo should be reduced until balance is retained. 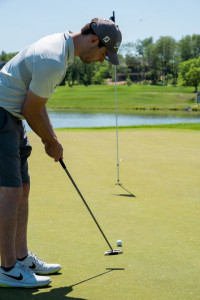 The tempo required for a putter is vastly different from other golf clubs. The speed of the swing is much slower, yet it still requires a smooth action. A good tempo for putting is 2:1 with the backswing being only twice as fast as the acceleration on the forward stroke.

This is a patented counterweight training system aimed at increasing flexibility and range of motion while strengthening muscles used in the golf swing.

Its proprietary shaft synchronizes the rhythm between arms, upper, and lower body to ingrain a good tempo and a balanced swing.

This is a one-piece band that keeps the body and arms together during the takeaway for a more efficient golf swing.

This is similar to the Orange whip tempo trainer to improve golf swing tempo, timing, and grip position with removable weights at the end of the shaft to simulate both woods and irons.

Having a smooth swing with a good tempo will aid in many aspects of the swing and enable more control and consistent swing path and impact. Ability and flexibility are two factors that make it easier to achieve a perfect tempo.

However, average golfers have to work hard and follow drills offered by professional coaches to achieve some level of success.

Once the tempo is resolved it will translate into more control and address many other swing defects.

Following the drills described above and using the training aids will speed up the learning cycle, lead to consistency and thus enable lower scores and lower handicaps.

How to Stop Topping a Golf Ball

What is a Golf Calcutta?

What is a Golf Calcutta?