In 2015 Cobra introduced the Fly Z Driver that represented a changed approach to Cobra’s driver performance. But like other golf club manufacturers, Cobra also produced a higher-end adjustable version of their driver. In this case, Cobra simply named this newer driver the Fly Z +.

Regardless of which version golfers purchase the same base features and clubhead design are present. Even in 2020 the Cobra Fly Z Driver still competes well against many other mid-range drivers. And in today’s article, we are going to be taking a closer look at this driver and reviewing its key features, technology, and benefits. We will also have a section that talks about which type of golfers the Fly Z Driver is best suited for. 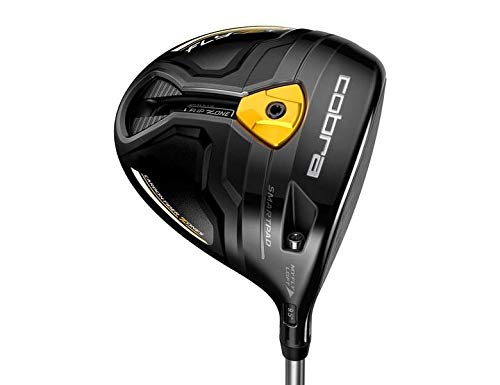 There are several key features on the Fly Z Driver that make it one of the more forgiving golf drivers. Here is a quick list:

Driver head design is always an important feature of any driver as it heavily influences the performance. In the case of the Fly Z, Cobra opted for a longer lower driver head. Thanks to some special graphics and styling the added length doesn’t show up all that much when viewed at address.

Other features that play a role in the Fly Z driver’s forgiveness are its low Center of Gravity and increased MOI. Both of these help create higher than average distance and greater forgiveness. In the next section we will talk about the more technologically advanced features such as the E9 Forged Face, Adjustable Hosel, and Adjustable Weighting.

When engineering the Fly Z driver, Cobra choose to use some higher-end technology. Most of the technology wasn’t cutting edge but was new enough to provide increased performance. Perhaps the most useful technology is the special E9 Forged Face.

With the E9 Forged Face, Cobra was able to increase ball speed and forgiveness by simply making the face thinner. This technology isn’t easy to make and required a special alloy and forging process. But the payoff to golfers is clearly evident and truly makes the Fly Z Driver one of the more forgiving drivers on the market.

Each Fly Z also comes with an Adjustable Hosel that allows for loft adjustments up to 3-degrees. This is perfect for those golfers looking to hone their performance off the tee. Plus, golfers that purchase the Fly Z + variant will be able to adjust the weighting to lower the ball flight.

Who should use this club

For the most part, the Cobra Fly Z Driver is meant to be used by mid to high handicappers who are looking more for forgiveness than distance. Plus, with many different lofts and several shaft options, golfers should have no trouble finding the right setup for their game.

Another group of golfers that might benefit from the Cobra Fly Z Driver are single-digit handicappers. But at this level, it would be best to get the + variant as this would allow for more tweaking of the driver.

Budget golfers could also see use in the Fly Z Driver as it has now dropped in price massively since its debut in 2015. Many Fly Z Driver can also be found second hand either online or in golf specialty stores like PGA Superstores for a relatively low price.

The most noticeable benefits of the Cobra Fly Z Driver are the overall forgiveness and relative ease of launch. These benefits are most notably seen by golfers who have a hard time hitting the center of the clubface or have slicing or hooking issues.

There are a couple of drawbacks to the Fly Z Driver. First is that this driver won’t add all that much distance to your game. Most golfers will find the Fly Z to be somewhere within +/- 10 yards of their current driver. The second issue is that original Fly Z Driver is no longer produced thus certain configurations are unavailable. There are some newer versions available in more configurations but they do cost more as a result.

Overall the Cobra Fly Z Driver is an excellent middle of the road golf driver. It offers golfers the most important features to increase forgiveness and cut down on wayward shots. Plus, it continues to offer good distance off the tee with some tweakability.

If you do plan on picking up the Cobra Fly Z Driver, we recommend getting the + Version for several reasons. First, is that it does allow for a bit more adjustability than the standard version. Second, since both the FLy Z and Fly Z + are no longer produced, the second-hand markets should have both versions at about the same price. Of course, if you just want to keep things as simple as possible the regular Fly Z is your best bet.

If you have any questions or want to comment on your experience with the Fly Z, please drop us a comment below! Visit our best drivers article for more options!

Deciding if this is the right driver for your game is easy with our detailed review!