Over the years, Callaway has had many iconic golf iron releases. One of those releases was the Callaway X20 Irons in 2008. When released, the clubs were an updated version of the previous generation’s well-selling X18 iron set. Touted as total performance irons that offer “technology, innovation, and playability”, the X20 Irons appeal to a large group of golfers.

In today’s article, we will be reviewing these Irons to see if they have stood up to the test of time. We’ll be taking a deep dive into the club’s key features and technology. A section will also be devoted to who the X20 Irons are best suited for. Because of the age of the X20 Irons, we will also include a section that highlights other Callaway Irons that are available.

Now that you know where we are going, let’s start this review article by taking a look at the Callaway X20 Irons key features! 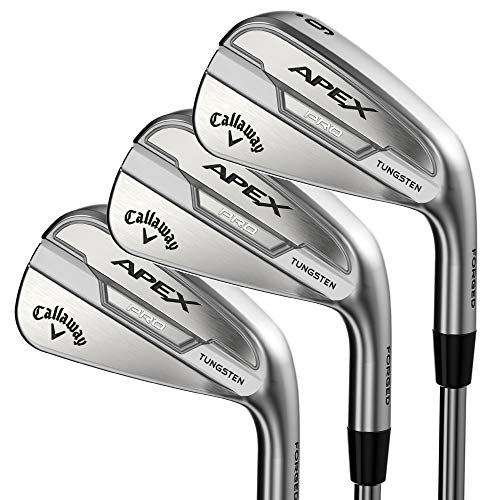 The Callaway X20 Irons have many key features that were improved upon from the X18 version. Some of the biggest features include:

While we will reserve the technological and playability characteristics to a later section, we can talk about what this combination of features is meant to do. Firstly, all three of these key features are to increase forgiveness across the entire clubface. So while you might mishit the ball occasionally, the X20 Irons should keep the adverse side-effects to a minimum.

Secondly, most of these key features are a refinement of the features found on the X18 Irons.

Some weighting changes and slight tweaks have resulted in a six percent lower Center of Gravity compared to the X18 Irons. This means shots will have a more consistent launch angle for greater distance and confidence.

Who is best suited for these irons?

As described by Callaway, the X20 Irons are suited for players looking for ultimate forgiveness and enhanced confidence. Considering most golfers are looking for more forgiveness, the Callaway X20 will appeal to almost every golfer from mid to high handicaps. Golfers who have trouble getting nice high launch angles will also benefit from the X20 Irons lower Center of Gravity.

One group of golfers who won’t be well suited to the X20 Irons are higher-skilled low handicappers. Because of its cavity back design, the X20 Irons don’t have the ability to work the ball in a very meaningful way. They also lack some feel and specific weighting styles preferred by above-average golfers.

Overall, the X20 Irons are best for beginner or intermediate amateur golfers who are looking for a set of low-cost irons. They really are a great balance between cost and performance.

Despite being over ten years old, the Callaway X20 Irons still have some useful technology that has stood up to the test of time. The Extreme Notch Weighting, which increases weighting near the perimeter of the clubhead, is still used in today’s newest irons to increase forgiveness.

Progressive Wall Reduction is another special form of weight reduction, the lower the center of gravity. Technologically this isn’t a new concept, but the way the X20 uses the weight reduction to create a better center of gravity is impressive. Both the Extreme Notch Weighting and Progressive Wall Reduction is used in Callaway’s Core Technologies to create more ball speed and distance.

For playability, the X20 Irons fall somewhere in the middle of all cavity back irons. They have a decent feel and excel in getting the ball in the air. On the downside, they do lack a bit of feel and seem a little bulky compared to today’s newer cavity back irons.

At this point, many of the benefits of the X20 Irons have already been discussed. Things like forgiveness, distance, and high launch angles are all great benefits of the X20 Irons. Perhaps the greatest benefit of these irons is their value. Because the irons are over a decade old, their price is relatively low. But they still feature relatively good performance and quality, something that is perfect for golfers on a budget.

Of course, there are some larger drawbacks. First is that finding the X20 Irons in stock can be a challenge. Golfers will have the most luck finding the X20 Irons in a used condition either online or through Callaway’s pre-owned website. The second drawback is that the irons look a bit dated. They have a blockier body style that doesn’t have the same sleekness as today’s newest clubs.

Other Callaway Irons to Consider

Callaway is one of the largest producers of golf irons, so there are many more options to choose from. Some of the newest irons include the Rouge, Maverick, and Big Betha Series. Higher skilled golfers may even be interested in Callaway’s Muscle Back style Apex series.

If you want to save a buck or two, Callaway still offers some updated sets like the X Hot Series at lower prices. Other series like the Steelhead XR and Callaway Epic have also dropped in price. All these sets are newer and have more updated technology than the X20 Irons, albeit at a higher price.

You’ve made it to the end of our review for the Callaway X20 Irons! We hope that this guide has helped you learn more about the X20 Irons and whether or not they are the right set of irons for you. If you are still unsure if the X20 Irons can help your game, here is some parting advice.

First, keep your expectations in line with what the X20 Irons can deliver. They were first released in 2008, so they are a bit dated and this shows in the club’s design. These irons will also lack a bit in performance but nothing too noticeable. It is also important to note that you could have trouble finding the X20 Irons in stock. So these clubs might not be available right when you want them.

Overall, the Callaway X20 Irons were best in class when they released. Today, they still hold up well, and are a perfect set of clubs for beginning golfers or golfers on a budget.

For other Callaway Irons, read our detailed reviews!

Deciding if these irons are the right set for you is easy with our detailed review!

What is the Ideal Driver Shaft Length?