Since the introduction of revolutionary Jailbreak Technology, Callaway drivers have been some of the best selling drivers on the market! While the 2018 Rouge driver was the first to feature this cutting edge tech, it was the Epic Flash that captured the perfect mix of forgiveness and distance. But does the Callaway Epic Flash Driver still hold up to the hype and can it help my golf game? That’s the question we look to answer.

To do this, we will take a close look at all the key features of the Epic Flash Driver and what each does to create top of the line performance. Other topics covered include who the Epic

Flash is best suited for and the pros and cons of using the Epic Flash compared to other drivers.

With so much to cover, its time to jump into our review of the Callaway Epic Flash Driver starting with its key features! 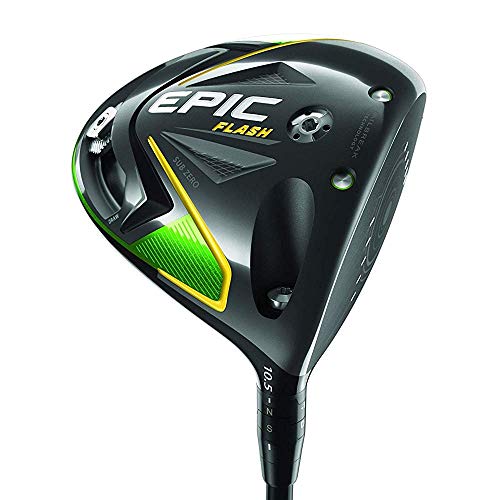 The Callaway Epic Flash Driver is one of the most advanced golf drivers that Callaway has ever created. To make this possible, Callaway included key features such as:

As we have previously touched on, Jailbreak Technology has made a return with the Epic Flash. No real changes were made except for slight tuning and weighting adjustments. All the same forgiveness and ball speed increases are present.

But the newest feature, Flash Face, is what is getting everyone excited. Made by Artificial Intelligence and Machine Learning, Flash Face brings unmatched spin reduction and ball speeds. More on Flash Face a little later in our review.

Overall, these features come together to create a low spin driver that excels in distance and forgiveness. It is Callaway’s answer to TaylorMade’s revolutionary M Series of drivers and the wants of golfers around the world.

Who is suited to this club

Callaway’s intention with the Epic Flash Driver was a driver that would appeal to the golf masses. Because of its ease of use and focus on forgiveness, the Epic Flash can really be used by almost any golfer. Callaway also offers lots of premium shaft options and driver head configurations so you can find the perfect fit for your individual game.

Perhaps the group that can benefit the most from the Epic Flash Driver are golfers who experience lots of sidespin off the tee. So if you slice the hook the ball off the tee, the Epic Flash can help reduce the effects and get you closer to the fairway. But be mindful that while the Epic Flash will reduce side spin, it won’t eliminate it entirely. So make sure that you try and correct any swing issues if you want to really see little to no sidespin.

Lots of cutting edge technologies are packed into the Epic Flash. Some of it can be seen while a fair bit of it is working behind the scenes. By far the most advanced is Callaway’s patented Flash Face. As discussed in the Key Features section, Flash Face was created by Artificial Intelligence after cycling through over 15,000 face contours. By utilizing a “wave-style” contour Flash Face improves ball speeds across the entire driver’s face.

In terms of playability, the Epic Flash is a very neutral driver. If offers some workability but is mainly meant to produce straight drives. Golfers can customize their shot shape slightly using the Adjustable Perimeter Weighting system. For those who are looking to really work the ball off the tee, other Callaway Drivers offer better workability than the Epic Flash.

Another thing that changes the playability of the Callaway Epic Flash are the three different shaft options. Project X Even Flow Green shaft gives an “even” bend profile for higher launches while the Project X HZRDUS Smoke offers low launch and low spin. The Mitsubishi Tensei shaft falls in the middle with mid torque and launch.

Thanks to all the new technology and great customization options, the Callaway Epic Flash Driver has many positives including:

There are a couple of drawbacks that make the Epic Flash fall just short of being the perfect driver.

You’ve made it to the end of our review! We hope that this review article of the Callaway Epic Flash Driver helped answer all your burning questions about the club and its performance. If you have any other questions or want to share your thoughts on the Epic Flash, please feel free to drop us a comment below.

In all, the Callaway Epic Flash Driver is, and will continue to be, a top tier driver. With a unique mix of innovative technologies and tried and true features, the Epic Flash performs to the highest degree. Factor in all the different customization options and its hard to find a better driver straight from the factory. And now that Epic Flash is more than a year old, prices for both new and used versions should begin to drop to a more affordable level. So go ahead and add the Epic Flash to your golf bag and start hitting more fairways.