Most golfers are familiar with the concept that the easiest way to lower your handicap is to improve your short game. And it’s easy to see why that is true. Almost 65% of all shots made during a round of golf happen within 100 yards of the hole. And yet, while acknowledging this to be true, relatively few golfers invest the time and effort needed to actually get better at this critical part of the game (1).

Basic fact: if an average golfer has two hours to practice, and they devote that entire time to just hitting irons and drivers, they likely won’t suddenly start hitting the ball longer or straighter. But, alternatively, if they were to spend two hours working on their short game, chances are good that they would see tangible improvements that would make an immediate impact on their scorecard.

Essentially, the short game consists of pitching, chipping, sand shots and putting. Each is important and requires practice, but for the purposes of our discussion today, we will be focusing on one key area of the short game: chipping. For those who can’t get to the range as often as they’d like to consider investing in a chipping mat and hitting net to practice from your home.

If you do really struggle with chipping, consider a chipper – this is a combination between a putter and iron and can really improve your chip shots to the green. Read through our detailed reviews for the best chippers here! 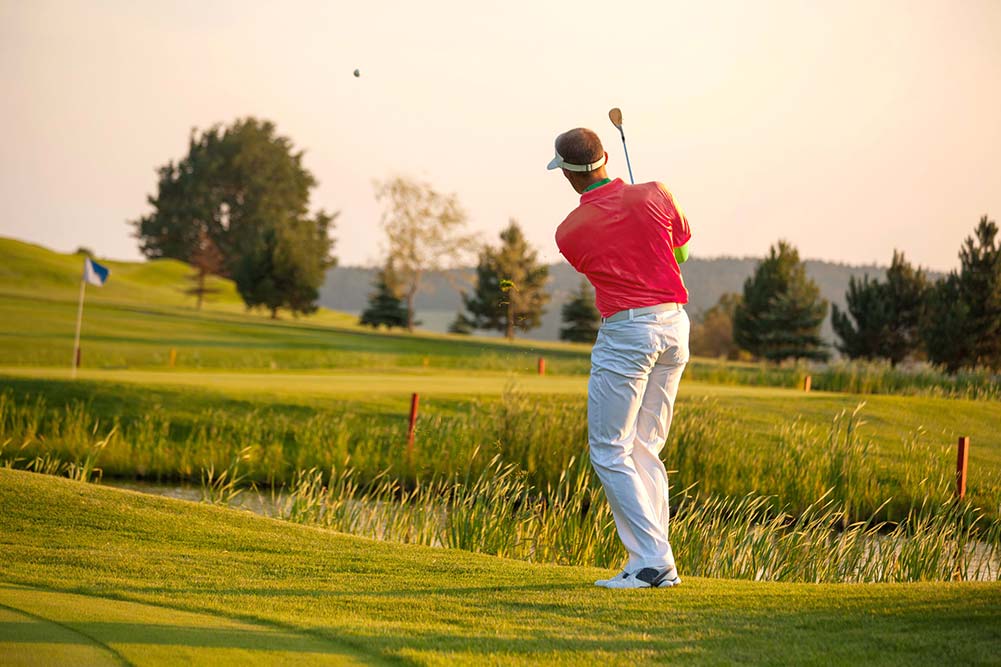 Even the greatest players in the world don’t hit every green in regulation. In fact, the average number of greens that PGA Tour players hit in regulation during each round is 12 (2). 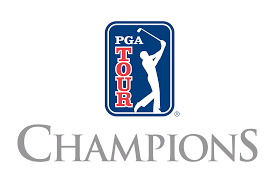 That obviously means that they miss an average of 6 greens, requiring them to chip it close enough to salvage pars on those holes.

Judging from their usual par or sub-par scores, their chipping is remarkably good. If it wasn’t, many of those salvaged pars would have turned into bogeys.

It goes without saying that the pro’s understand the importance of having a stellar short game and they devote countless hours to honing it.

Amateurs need to be good chippers, too

It goes without saying that higher-handicap golfers miss a lot more greens than the pro’s do.  Therefore, it can be reasonably argued that the relative importance of good chipping is even greater for amateurs. Simply put, the more greens you miss in a round of golf, the greater the need to have sufficient chipping skills to minimize 3-putt greens and the resultant bogeys and double-bogeys.

Some interesting research has shown just how big of an issue this is for amateurs. As it turns out, the number of greens you miss during a round is dependent upon your handicap level. For example, a golfer with a handicap of 30 or higher, hits just 6% of greens on average in a round (that’s only 1-2 greens).

This greens-in-regulation percentage gradually improves as a player’s handicap level goes down.  20-25 handicappers hit 12% of greens (2-3 greens), 10-15 handicappers hit about 27% (5 greens), etc.  So, clearly, getting better at chipping is critical for everyone, but even more so if you miss a lot of greens. 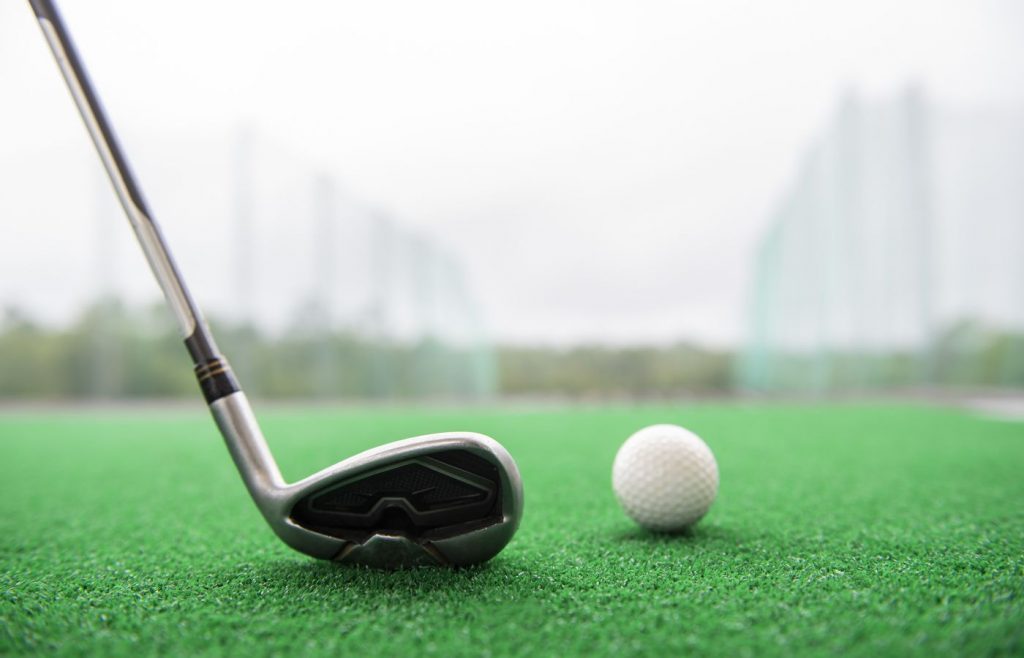 OK, I want to be a better chipper. How?

There are several excellent chipping drills that you can utilize to improve your chipping. But before we look at those drills, it may be beneficial to first review some of the essential basics of proper chipping technique.

Except for when minor setup changes are needed for unique shots, the basic chip shot requires you to do three things: 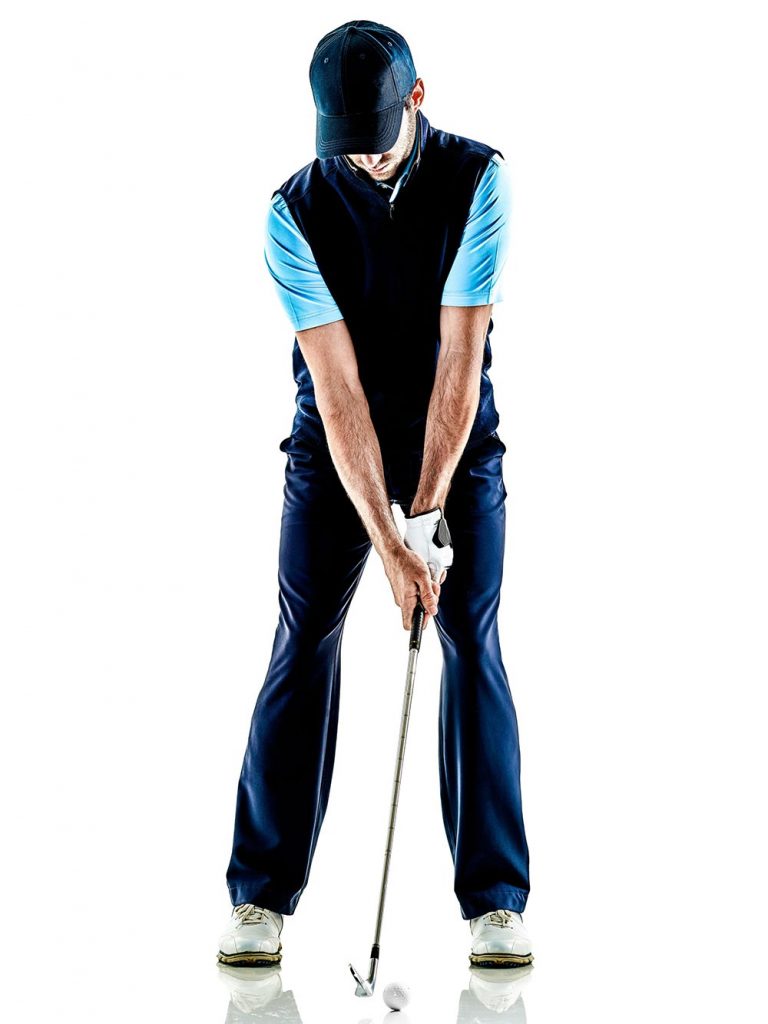 There are two primary factors that go into becoming a good chipper. The first factor is the quality of ball contact. Making crisp contact with a downward angle of attack is all-important. Poor chippers often flip their hands through the impact zone in a subconscious effort to “lift” the ball into the air. 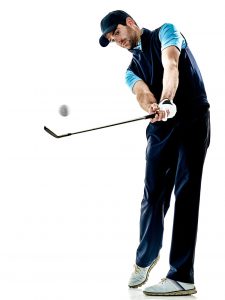 This usually results in either a “bladed” shot that strikes the top half of the ball and sends it screaming across the green, or a “chunked” shot where the club head hits the turf behind the ball, and the ball goes only a few yards. For golfers who flip their hands during their chip shots, check out the drills below aimed at helping you improve ball contact.

The other key factor in chipping is distance control. To be a good chipper, it is critical to be able to control how far your chip travels, both in the air and on the ground. Without this ability, you will leave some chips well short of the hole, and hit others that go far past the hole.

You need to be able to hit chips the proper distance so that you’re left with short putts to save par. For golfers who have difficulty with this, check out the drills below aimed at helping you improve distance control on your chips.

This drill is fairly simple and can be done either on the practice green at your course or even on the carpet at home. Its aim is to eliminate the urge to flip your hands at impact. Take two coins and place one about 2 inches in front of the other.

Take your proper stance, and attempt to “chip” both coins, hitting the first one and allowing the club head to continue past impact to hit the second one.  If you flip your hands, you will either hit the first coin and miss the second one, or you will miss both altogether.  Practice until you are able to eliminate the flip and hit both coins consistently.

This is another drill for those who tend to try lifting the ball up, or flipping their hands at impact.  Usually, it is the right hand that is the culprit in a “flippy” stroke. What happens is that the left-hand stops just before impact and the right-hand flips.

The goal of this drill is to eliminate this tendency of the right hand to take over. Make your normal chipping stroke but, just as you are coming into impact, release your right hand from the grip. Keep your left hand moving through impact, while keeping your overzealous right hand from influencing the contact. With practice, you will start to make solid, descending strikes and you can gradually re-introduce the right hand. 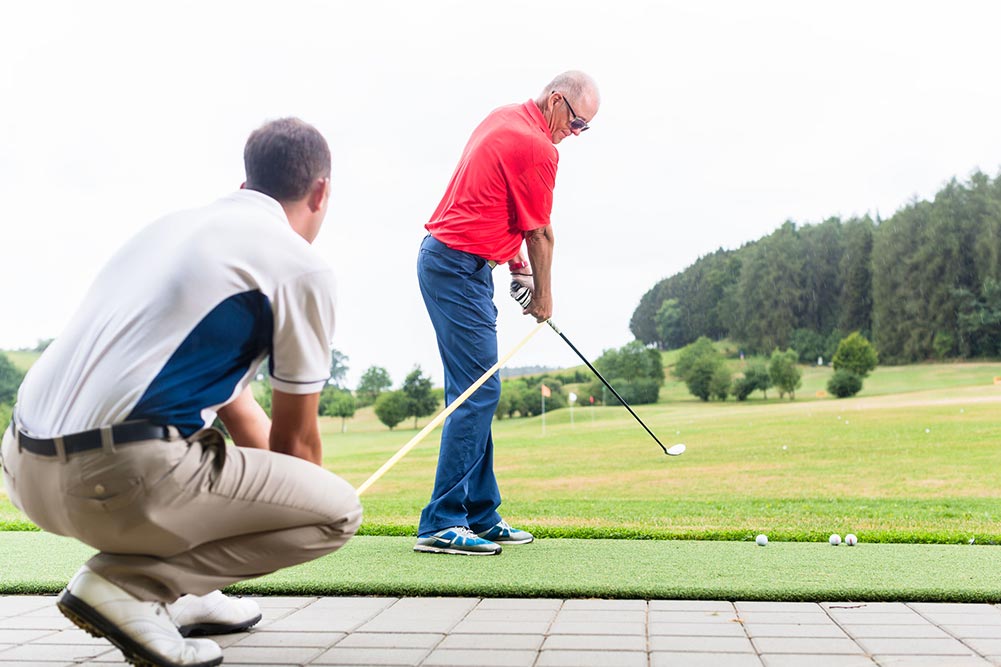 This is yet another drill to re-train your hands not to flip during the swing. To whichever club you are chipping with, add a second club turned upside down and serving as an extension to the first, so that you are holding both by their grip ends. This essentially creates one extra-long club.

Assume your normal chipping stance, with the extended part of the club running up your left side and under your left arm. As you chip, your aim is to avoid having the extended club hit your left side. If you flip your hands during the stroke, it will be impossible to prevent that from happening. Practice until you are able to make a normal chipping stroke where the club extension does not make contact with your side.

The goal of this drill is to become proficient in hitting your chip shots specific distances, with different clubs. This drill does not require that you hit at or toward a hole. Simply take 5 different golf clubs and lay them out of the green, one in front of the other, at intervals of 5-6 feet, with the first one just a couple steps onto the green.

This establishes a sort of “ladder” with each club being a rung on that ladder. Then practice hitting chip shots so that the ball lands in the spaces between the rungs, initially between clubs one and two, then between clubs two and three, and so on. This will help you gradually be able to control the distance the chip needs to travel in the air. 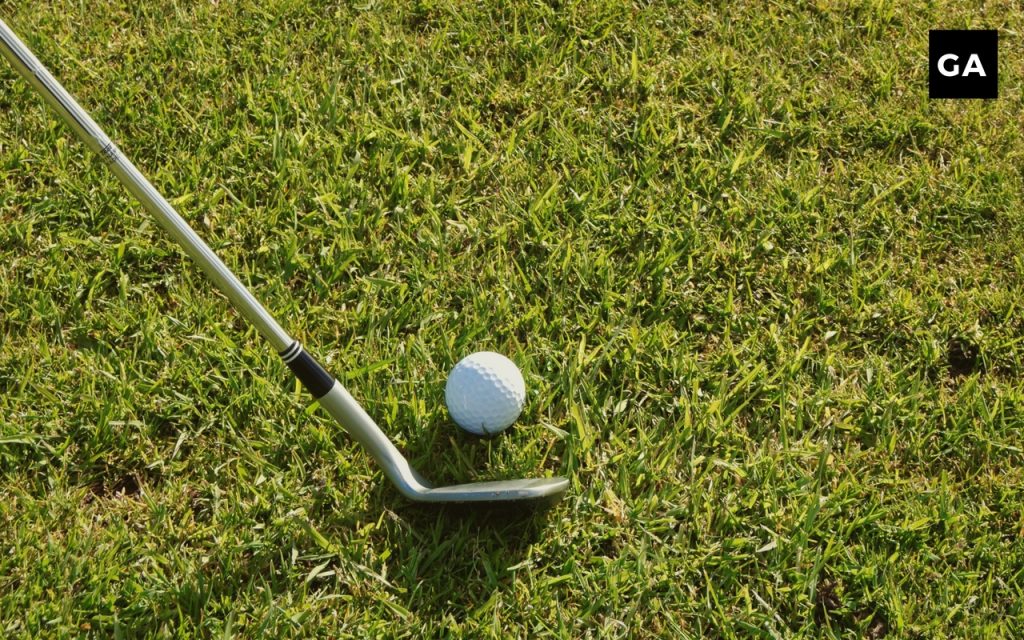 Just as with the previous drill, this one is aimed at improving your ability to control the distance that you hit your chips. However, unlike in the Ladder Drill, you do now want to chip to a specific hole or target. Instead of just practicing how far the ball travels in the air, however, you now also want to see how far the ball rolls on the ground after it lands. This is obviously a more realistic drill, mirroring the real chips you will hit on the course.

With practice, you will be able to determine, for any given chip, how far onto the green the towel should be, so that the ball then rolls close to the hole. Your focus should be on hitting the towel, not on the hole.  This is a great drill to get your distance control dialed in. 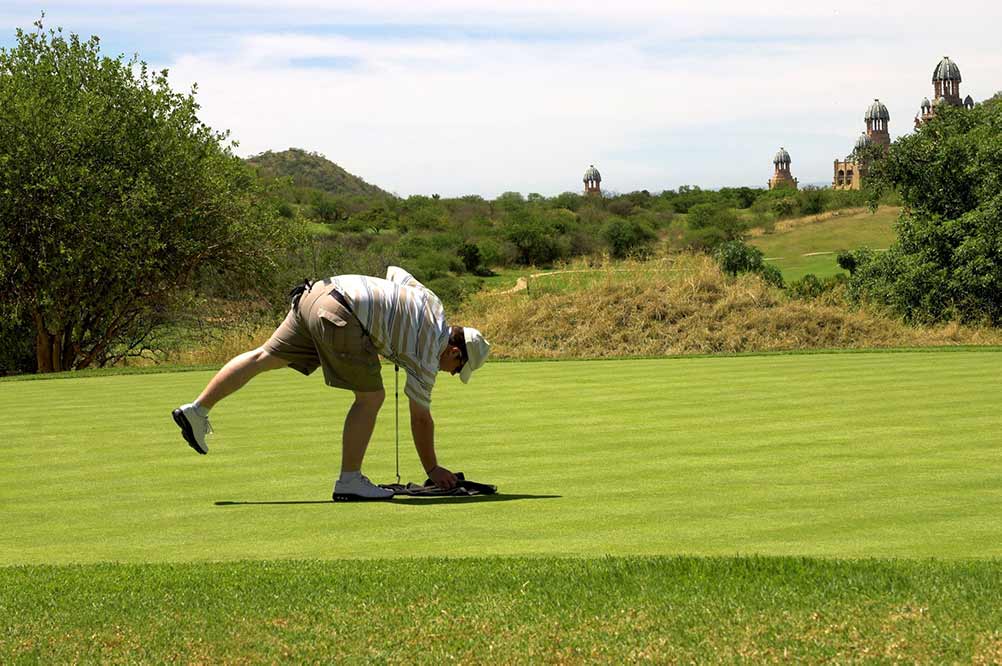 If you really want to see your scores drop, there is no easier way than to become a better chipper. And it should be reassuring to know that good chipping doesn’t require size or strength. Juniors, Women and seniors can become just as good at chipping as anyone else. All it takes is learning the proper technique and learning how to control your distance. If you don’t have time to get to the range or course as often as you’d like then consider getting yourself a home golf simulator and pairing it with the Rotary Swing Program.

Have our read through our other detailed training guides here:

For all your golf equipment needs, head to our homepage!

The school teacher was taking her first golf lesson.“Is the word spelled p-u-t or p-u-t-t? she asked the instructor. “P-u-t-t is the correct spelling,” he replied. “Put means to place something where...

We are all astonished when we watch professional golf events on TV, and see Dustin Johnson or Rory McIlroy routinely hammer their drives well over 300 yards. In fact, on today’s PGA...